As outlined in the new Hydrogen Strategy and the Prime Minister’s 10 Point Plan, the UK’s ambition is to achieve 5GW of low carbon hydrogen production capacity by 2030. There are a variety of different ways to produce hydrogen, and the associated GHG emissions depend on the inputs and technologies used. However, a definition of what is ‘low carbon’, including the GHG emissions methodology to be used, has not yet been set by the UK Government.

In our new report for the UK’s Department for Business, Energy & Industrial Strategy (BEIS), E4tech and LBST set out options and provided recommendations for how ‘low carbon hydrogen’ could be defined under a new UK standard, including indicative GHG emission thresholds. 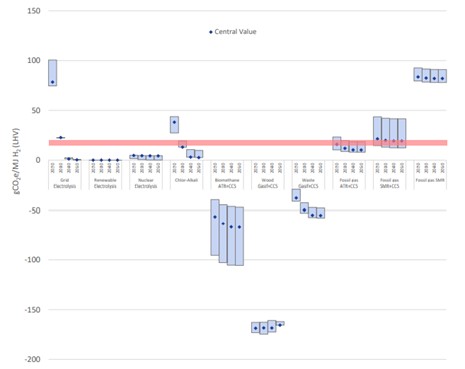 This work has directly informed BEIS’ consultation on a low carbon hydrogen standard, and has been published alongside the consultation. The finalised standard will be used by the UK Government to determine eligibility for capital support programmes and possible revenue support schemes.

E4tech led this five month study for BEIS, working in partnership with LBST, and with the UK’s Hydrogen Advisory Council acting as a steering group. Our work involved interviewing different standards and governance systems globally to highlight key challenges and lessons learnt, with case studies setting out the detailed specifics of how five schemes currently operate. We modelled the lifecycle GHG emissions of ten different hydrogen production pathways and seven downstream distribution chains, to highlight key sensitivities and assess where a possible GHG emissions threshold could be set. Different options for a new standard were then discussed and assessed against a set of high-level principles, to recommended priorities for the development of the standard.

BEIS have used the findings of our study to further their policy thinking, launch the consultation on the low carbon hydrogen standard, as well as to inform their international work via the International Partnership for Hydrogen and Fuel Cells in the Economy.