The Executive Summary of the Handover and Project Completion report summarises our approach and also the main findings of the three key stages of the project; Literature Review and Stakeholder mapping, Technology Value Chain Prioritisation, and the Technology Country Case Studies. The published report also outlines the next steps as part of the larger Transforming Energy Access (TEA) programme. In the first stage we prioritised Anaerobic Digestion (AD), Gasification and combustion to steam turbine, from an initial list of 27 technologies based on a multi-criteria analysis. Based on this analysis, the research conducted during the second stage generated a database of existing project examples in SSA of these three technologies. Based on existing deployment we prioritised AD and gasification projects as basis for the Technology Country Case Study stage.

As barriers encountered for gasification were so wide-ranging there is no realistic opportunity for research to boost replication potential and we recommended focusing future research efforts on anaerobic digestion. Through targeted research, DFID could add impetus to the growing commercial investment in SSA’s anaerobic digestion sector. We recommended targeted research themes in each of the six identified barriers to support the replication of anaerobic digestion in SSA. Opportunities for replication of anaerobic digestion in SSA exist in particular due to the large number of agri-businesses with concentrated on-site feedstock availability, existing successful project examples to build upon, and the potential to reduce capital cost and increase productivity through innovation, therefore achieving commercial viability. 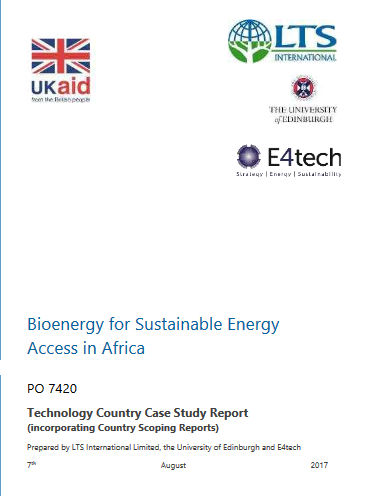